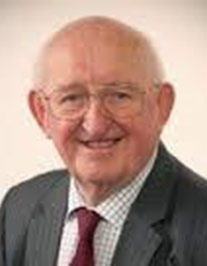 Duncan Dowson was born in 1928, which means, he celebrated his 85th birthday just one month ago. His academic career is closely linked to the University of Leeds where, in 1950, he received an honours Bachelor of Science degree in Mechanical Engineering. In 1952, he finished his PhD thesis on „Cavitation in Lubricating Films Supporting Small Loads“. Between 1952 and 1954 he worked in industry at the Sir W. G. Armstrong Whitworth Aircraft Company and then returned to the University of Leeds where he has been holding a number of different positions up to the present day.

He became lecturer in 1954; senior Lecturer in1963; reader in 1965 and, finally, Professor for Engineering Fluid Mechanics and Tribology in 1966. His research during that time resulted in a number of important publications like „Elastohydrodynamic Lubrication“, by D. Dowson and G. R. Higginson (1966, 2nd. Ed.1977), „History of Tribology“, Longmans, D. Dowson (1979, 2nd Ed. 1998), „Mechanics of Joints and Joint Replacements“ (1981, Co-Editor with Professor V. Wright) and „Ball Bearing Lubrication“, B. J. Hamrock and D. Dowson (1981), „Bio-Tribology“ is still in preparation. Due to his expertise, Prof. Dowson served on several committees, especially from 1964 to-1966 on the so called Jost Committee on Lubrication Education and Research from which the word „Tribology“ and thus the name of our society once originated. In 1967 he became chairman of the British Ministry of Technology Committee on Tribology Education & Research. From 1972-1976 he joined the British Department of Health & Social Security, Orthopaedic Implant Committee.

Duncan Dowson’s work in cooperation with Sir Gordon Higginson and others complements what Tower, Gümbel and Vogelpohl achieved for the hydrodynamic lubrication of rigid, plain contacts. Today, some may think that the formulae of Dowson and Higginson are just an engineering type rule of the thumb approximation with some obscure exponents no longer needed as we have elaborate numerical simulation tools. This is a misconception. The authors of this formula delivered a piece of work of the same rank as the one of Osborne Reynolds and Ludwig Prandtl when it comes to fluid dynamics, and they based their research on extensive numerical simulations! Doing so with the computational power of the nineteen fifties was an enormous achievement in itself and, by our measures, took enormously long computation times.

Given all this, Göttingen, the city of the Max Planck Institute for Fluid Mechanics, Ludwig Prandtl and Georg Vogelpohl is really a place appropriate for honouring Duncan Dowson. Like Georg Vogelpohl, Duncan Dowson started with mathematics, physics and fluid dynamics which led him to tribological contacts. This time, however, it was concentrated contacts and elastohydrodynamic lubrication. In this field, Alexander Mohrenstein-Ertl had done some basic work. He was the first to postulate the classic EHL Pressure distribution with the characteristic outlet pressure spike in rolling contacts, but Duncan Dowson and Gordon Higginson were the first to achieve a thorough understanding of the mechanisms governing EHL lubrication and to develop a complete theory and, like Vogelpohl for plain bearings, to derive engineering type expressions. Duncan Dowson is known as well for the Leeds-Lion conference, of which we celebrated the 40th anniversary beginning of this month. He is also known as one of the owners of the tribology gold medal of the ITC.

Prof. Dowson received the Georg-Vogelpohl-Award in 2013.