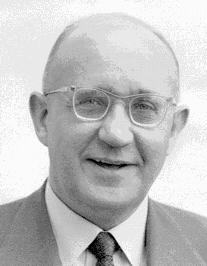 Georg Vogelpohl was head of the Department of Tribological Research at the Max Planck Institute of Fluid-Mechanical Research in Göttingen. As a result of his pioneering work and numerous fundamental publications in the field of friction and wear (later designated as tribology) he achieved world-wide recognition.

Georg Vogelpohl, one of several children of a railway official, grew up in Osnabrück and completed his schooling with the mittlere Reife. He practiced in industrial plants in Osnabrück, in order to become a mechanical engineer. After taking evening courses, he completed the requirements for the Reifeprüfung in 1919. He began his studies in mathematics and physics at the Technical University in Hannover and then continued at the universities of Münster and Berlin. Because of financial difficulties, he had to interrupt his studies several times and worked as a machine-shop foreman and constructor in Spain.

His early work concerned topics in the field of theoretical fluid mechanics. He performed wind-tunnel tests and experiments on air resistance, especially that of railway vehicles. His results indicated the possibility of saving a considerable amount of energy with the use of appropriate streamlining. This work resulted in the construction of the streamlined steam locomotive of series 05, the first steam locomotive that attained speeds over 200 km/h.

His occupation with the drag coefficient of entire vehicles led him to the problem of bearing friction and consequently to the differential equation set up by Reynolds. This equation describes the variation of pressure and friction in viscous liquids flowing in thin films. The solution of this equation allows the calculation of the force exerted by the oil film, the friction, and the lubricant requirement in bearings and other lubricated sliding surfaces.

In the course of one decade, he published four major theoretical articles on this topic (2 VDI research volumes). In one of these articles, he formulated his famous minimal theorem on bearing friction and thus justified the applicability of new solution methods based on the calculus of variations.

In further articles, he considered the heat balance in the sliding gap through which lubricant is flowing and the transfer of frictional heat from the lubricant film into the walls.

With these publications, Prof. Vogelpohl achieved national and international recognition. In engineering fields, confidence in the Reynolds theory and its results progressively increased. Cooperation with the founder of modern fluid mechanics, Ludwig Prandtl in Göttingen, gradually became more intensive. After several years of effort, Prof. Vogelpohl succeeded in establishing an adequate place of work in 1942: the Abteilung Reibungsforschung Berlin of the Kaiser-Wilhelm-Institut für Strömungsforschung in Göttingen. Air raids and the resulting destruction initially prevented effective operation. After the war, he was finally able to begin with the systematic organisation of his department.

Even before completing the requirements for his doctorate, Georg Vogelpohl attempted to simplify the results of the Reynolds theory in such a way that they were comprehensible to engineers and applicable in mechanical engineering without elaborate calculations. He succeeded in representing the essential relationships in a clear and simple manner with only a slight sacrifice in accuracy and generality. This work constitutes a major portion of his more than eighty publications and culminated in his most important publication, “Operationally Safe and Reliable Sliding Bearings” in 1958.

A good example of the original ideas which he developed is the concept of the ‘wear spectrum’. For this purpose, he plotted the ratio of the linear abrasive loss of mass to the associated (sliding) path length for various technical devices, such as sliding bearings, brakes, oil-testing machines, etc. The result of this procedure is a spectrum which extends over many powers of ten and which is very well suited for use as a simple method for appraising the quality of bearing designs and constructions.

His academic career began with a position as an assistant in Berlin and his completion of the requirements for his doctorate in engineering in 1936. After his habilitation in Hannover in 1944, he was responsible for the fields of petroleum physics and hydrodynamics there. At the end of the war, his contact with Hannover had been interrupted. Hence, he first accepted a position at the University of Berlin, where he was a lecturer in thermodynamics and mechanics.

In 1946, he was appointed as head of the new Department of Tribological Research in Göttingen. In 1950, he became a scientific member of the Max Planck Institute of Fluid-Mechanical Research there.

The Technical University in Braunschweig awarded him the venia legendi for machine elements and fluid mechanics in 1952 and appointed him as adjunct professor in 1958. The Braunschweigische Wissenschaftliche Gesellschaft appointed him as a correspondent member in 1963. In 1968, he was named honorary professor at Clausthal University of Technology.

As a speaker at scientific conferences and symposia, he was highly respected and welcome because of his well-versed and humorous lecturing style. As a guest lecturer and speaker, he received invitations to the United States and various European countries.

For the Society of Tribology, Prof. Vogelpohl’s pioneering achievements in the field of sliding bearing technology and in education were the justification for designating its annual recognition of excellence for accomplishments in the fields of development, application, or propagation of tribological information and results as the “Georg-Vogelpohl-Ehrenzeichen”.